Search
JavaScript is disabled for your browser. Some features of this site may not work without it.
There is a currently problem with depositing theses which we expect to be resolved ASAP. Our apologies for any inconvenience Hannah, Polson; Theivananthampillai, Paul
With the increasing focus on technology, the demand for the electronic provision of services is growing. Public sector organisations are beginning to consider whether they too should integrate technology into their operations, ... 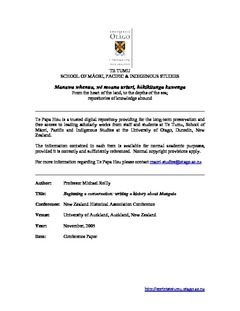 Beginning a conversation: writing a history about Mangaia

Reilly, Michael
Imagine the following scene: Rarotonga International Airport, the date 26 April 1988. A young Pacific historian is standing in front of a weighing machine at the domestic check in. About to place his bags on the tray, he ... He Kura Māori, he Kura Hāhi

Matthews, Nathan
Church initiated and operated Māori secondary boarding schools have existed in Aotearoa in various forms since the arrival of the missionaries in the early 19th century. Unfortunately, these schools have contributed to the ... Reilly, Michael
At the inaugural Te Kāhui Kura Māori conference held at Waikato University in 2007 I reviewed our present School of Māori, Pacific and Indigenous Studies at Otago University since the establishment of a Māori Studies ... Chung, Kim-Choy; Fam, Kim-Shyan; Holdsworth, David K
Trust decreases the perceived risk of using a service. Since e-learners have no direct contact with the education providers, trust plays an important role in an e-tertiary setting. In a review of the literature, hypotheses ... Beyond consultation: Getting good outcomes for everyone in cross-cultural resource consent practice

Kanawa, Lisa; Stephenson, Janet; O'Brien, Marg
When the Resource Management Act (RMA) was introduced in 1991 it brought in new requirements for the consideration of Māori knowledge and values. Nearly 20 years on, consultation with Māori has become a normal part of the ... Reilly, Michael
Tēnā koutou katoa. Tangi kē. I wish to thank the organisers for allowing me to speak here today. I should point out that I am substituting for my colleague, Dr Brendan Hokowhitu, who was not able to attend. Obviously ... 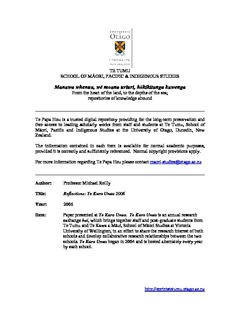 Reilly, Michael
These reflections are mere fragments of words and phrases that caught my attention listening to the wānanga (seminar) that has been going on over the last three or four days. These kōrerorero (discussions) are themselves ... 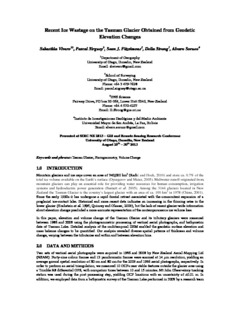