The determinants and consequences of overweight and obesity 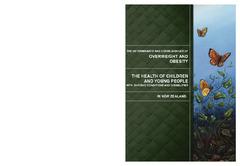 The determinants and consequences of overweight and obesity by Dr Judith Adams (4.932Mb)

Link to publisher's version
Cite this item: Adams, J. (2013). The determinants and consequences of overweight and obesity (National). (E. Craig, A. Reddington, J. Adams, R. Dell, S. Jack, G. Oben, … J. Simpson, Eds.). New Zealand Child and Youth Epidemiology Service. Retrieved from http://hdl.handle.net/10523/10429
Permanent link to OUR Archive version: http://hdl.handle.net/10523/10429
Abstract:
According to the World Health Organization, childhood obesity is one of the most serious public health challenges of the 21st century.1 Over the past thirty to forty years there has been a marked increase in the prevalence of childhood obesity in almost all countries for which there are available data.2 New Zealand is part of this global trend. The New Zealand Health Survey 2011/12 found that, among children aged 2–14 years, 20.7% were overweight and 10.2% were obese.3 In boys, but not in girls, there was a statistically significant increase in the obesity rate in 2–14 year olds from the 2006/07 survey (8%) to the 2011/12 survey (10%). For 5–14 year old children, although the rate of obesity did not change from 2002 (9%) to 2006/07 (8%), from 2006/07 to 2011/12 there was a statistically significant increase (to 11%). Childhood obesity carries significant physical and mental health risks both in the short term and the long term.4 In the short term, childhood obesity may be associated with asthma,5 sleep apnoea,6-8 slipped femoral capital epiphysis,9,10 being bullied, teased and socially marginalised,11-15 and having low self-esteem.16,17 Childhood obesity has been associated with emotional and behavioural problems even in pre-school children.18 Many studies in children have documented the association between childhood obesity and most of the major risk factors for later cardiovascular disease: high blood pressure, dyslipidaemia, hyperinsulinaemia and/or insulin resistance, abnormalities in left ventricular mass and/or function, and abnormalities in endothelial function.4 A number of large, long-running cohort studies have found that childhood overweight and obesity is associated with premature mortality in adulthood and with an increased risk of type II diabetes, stroke, coronary heart disease, and hypertension later in life.19 It has been argued that this is largely because childhood overweight and obesity is a strong predictor of adult obesity.20,21 Obese children have a moderately high probability of becoming obese adults (in the range 40–70%)4 and adult obesity is associated with substantially increased risks of hypertension, dyslipidaemia, type 2 diabetes, coronary heart disease and stroke.22 This is the major reason why childhood obesity is considered to be a public health crisis.23 Adult obesity is also associated with an increased risk of gallbladder disease, osteoarthritis, sleep apnoea and respiratory problems and some types of cancer.22 The most convincing evidence for body fatness as a cause as a cause of cancer is for cancer of the oesophagus, pancreas, colon and rectum, breast (in post-menopausal women), uterus (endometrium), and kidney.24 There is a general consensus among obesity experts that the obesity problem is not simply a personal issue of eating too much and doing too little but a problem that has its roots in a mismatch between basic human biology, the product of thousands of years of evolution, and modern society. It therefore requires tackling complex social and economic issues and changing public policy in many areas including food production, manufacturing and retailing, trade, urban planning, transport, healthcare, education and culture.23 This in-depth topic aims to examine the determinants and consequences of childhood obesity and also to provide background information on the trends in childhood obesity prevalence (both globally and in New Zealand), defining and measuring obesity, and the natural history of obesity over the lifespan.
Date: 2013
Editor: Craig, Elizabeth; Reddington, Anne; Adams, Judith; Dell, Rebecca; Jack, Susan; Oben, Glenda; Wicken, Andrew; Simpson, Jean
Publisher: New Zealand Child and Youth Epidemiology Service
Series: National; The Health of Children and Young People with Chronic Conditions and Disabilities; Review Topic
Rights Statement: This work is licensed under a Creative Commons Attribution-Non Commercial-No Derivatives 4.0 International License http://creativecommons.org/licenses/by-nc-nd/4.0/ with the exception of the cover artwork.
Keywords: obesity; overweight; health determinants; childhood obesity
Research Type: Commissioned Report for External Body
Languages: English