Polarisation and Poverty Reduction in Africa: The Devil is in the Choice of Equivalence Relation 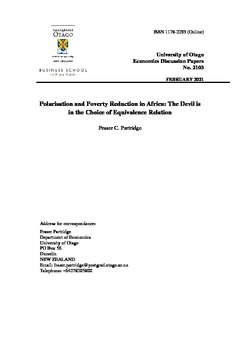 DP_2103.pdf (1.177Mb)
Permanent link to OUR Archive version: http://hdl.handle.net/10523/10648
Abstract:
The focus of this paper is the low observed mean consumption elasticity of poverty in Africa, and the suggestion that polarisation of national distributions, specifically the non-parametric ‘relative distribution’ method, is essential to understanding the low regional elasticity. The version of the methodology adopted results in a measure of absolute polarisation. We show that the results obtained for 24 countries in the region are entirely a product of this choice, and while preference for translation-invariance is a normative matter, claims regarding changes in distributions are not. There is no evidence of distributional changes unaccounted for by standard measures of inequality and mean consumption. Which, in turn explain the evolution of poverty levels in the 24-country sample. Given that changes in mean consumption and inequality, among the sample countries, account for both the changes in the chosen measure of polarisation and the evolution of poverty, there is no distinct role for the chosen measure of polarisation in accounting for the evolution of poverty in the region.
Date: 2021-02
Publisher: University of Otago
Series: Economics Discussion Papers Series
Series number: 2103
ISSN: 1178-2293
Keywords: Polarisation; Sub-Saharan Africa; Log Normal; Relative Distribution; Translation-Invariance
Research Type: Discussion Paper
Languages: English