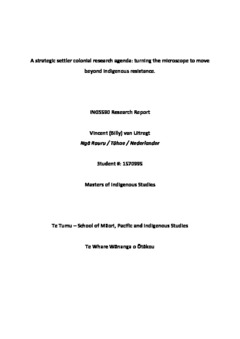 Research report file (1.004Mb)
Cite this item: van Uitregt, V. (Billy). (2021). A strategic settler colonial research agenda: turning the microscope to move beyond indigenous resistance. Masters of Indigenous Studies - INGS590 Research Report.
Permanent link to OUR Archive version: http://hdl.handle.net/10523/12083
Abstract:
This research report is a tryptic of essays that: deconstruct how indigenous narratives are understood and defined by the academy; analyses whether indigenous narratives have moved toward self-determination or are stuck in modes of survival and resistance; and, advocates and proposes a structure for the development of a strategic settler colonial research agenda aimed at dismantling oppressive structures of settler colonialism. The ultimate goal of the research is to support the movement of indigenous peoples out of narratives defined by survival and resistance. Each essay can stand alone but create a fuller picture when read together. The first two essays are foundational and serve as broad reviews of the literature and the third synthesises and responds to the ideas that emerge in them. If they were paintings hanging on a wall, the first two essays would sit either side, with the third placed in the middle.
Date: 2021
Series: Masters of Indigenous Studies - INGS590 Research Report
Rights Statement: Held by author
Keywords: Indigenous resistance; settler colonial; research agenda
Research Type: Other
Languages: English

Except where otherwise noted, this item's licence is described as Attribution-NonCommercial 4.0 International