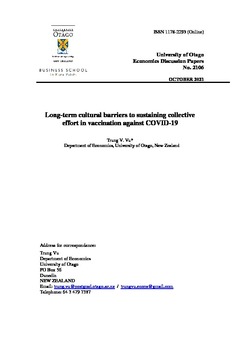 DP_2106.pdf (2.927Mb)
Cite this item: Vu, T. (2021). Long-term cultural barriers to sustaining collective effort in vaccination against COVID-19 (Economics Discussion papers No. 2106). University of Otago. Retrieved from http://hdl.handle.net/10523/12350
Permanent link to OUR Archive version: http://hdl.handle.net/10523/12350
Abstract:
This study attempts to shed light on long-term cultural barriers to strengthening collective action in COVID-19 vaccination. I propose that rugged individualism, characterized by emphasis on self-reliance and strong antipathy to government intervention, is linked to a greater prevalence of resistance to inoculation against the novel coronavirus across American counties. The main hypothesis of this paper rests upon the premise that a culture of rugged individualism is conducive to the emergence and persistence of mistrust, political polarization and distrust in science, which undermine collective effort in vaccination. Using subnational data for the United States, I consistently find evidence that rugged individualism, captured by long-run exposure to the westward-moving frontier in American history, has a positive influence on the predicted share of the population that is hesitant towards voluntary vaccination against COVID-19. In addition, individualistic counties tend to suffer from under-vaccination, captured by lower rates of the population that has been fully inoculated against COVID-19. More broadly, the findings suggest that rugged individualism is an impediment to resolving collective action problems, notwithstanding the widely acknowledged positive impact of individualistic cultures on innovation and long-run economic performance.
Date: 2021-10
Publisher: University of Otago
Series: Economics Discussion papers
Series number: 2106
ISSN: 1178-2293
Keywords: COVID-19 vaccination; Vaccine hesitancy; Collective action; Individualism; Culture; American frontier; Long-run development
Research Type: Discussion Paper
Languages: English