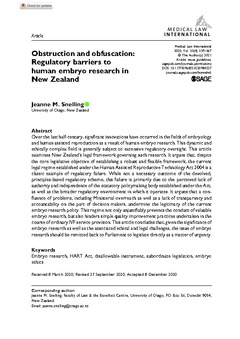 Link to publisher's version
Cite this item: Snelling, J. M. (2020). Obstruction and obfuscation: Regulatory barriers to human embryo research in New Zealand. Medical Law International, 20(4), 339–367. https://doi.org/10.1177/0968533220984227
Permanent link to OUR Archive version: http://hdl.handle.net/10523/12388
Abstract:
Over the last half-century, significant innovations have occurred in the fields of embryology and human assisted reproduction as a result of human embryo research. This dynamic and ethically complex field is generally subject to extensive regulatory oversight. This article examines New Zealand’s legal framework governing such research. It argues that, despite the core legislative objective of establishing a robust and flexible framework, the current legal regime established under the Human Assisted Reproductive Technology Act 2004 is a classic example of regulatory failure. While not a necessary outcome of the devolved, principles-based regulatory scheme, this failure is primarily due to the perceived lack of authority and independence of the statutory policymaking body established under the Act, as well as the broader regulatory environment in which it operates. It argues that a confluence of problems, including Ministerial overreach as well as a lack of transparency and accountability on the part of decision makers, undermine the legitimacy of the current embryo research policy. This regime not only unjustifiably prevents the conduct of valuable embryo research, but also hinders simple quality improvement practices undertaken in the course of ordinary IVF service provision. This article concludes that, given the significance of embryo research as well as the associated ethical and legal challenges, the issue of embryo research should be remitted back to Parliament to legislate directly as a matter of urgency.
Date: 2021-01-11
Publisher: Sage Journals
ISSN: 0968-5332; 2047-9441
Rights Statement: This version in OUR Archive is the author's manuscript accepted for publication after peer-review. The published version is: Snelling, J. M. (2020). Obstruction and obfuscation: Regulatory barriers to human embryo research in New Zealand. Medical Law International, 20(4), 339–367. https://doi.org/10.1177/0968533220984227
Keywords: Embryo research; HART act; disallowable instrument; subordinate legislation; embryo ethics
Research Type: Journal Article
Languages: English