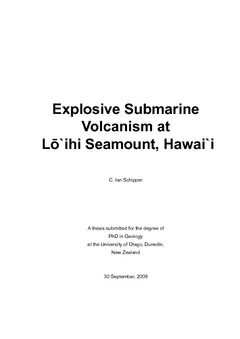 Explosive Submarine Volcanism at Lō`ihi Seamount, Hawai`i Thesis (9.794Mb)
Cite this item: Schipper, C. I. (2009, September 30). Explosive Submarine Volcanism at Lō`ihi Seamount, Hawai`i (Thesis, PhD). Retrieved from http://hdl.handle.net/10523/12489
Permanent link to OUR Archive version: http://hdl.handle.net/10523/12489
Abstract:
Even though the vast majority of volcanism on Earth occurs under water, very little is known about submarine volcanoes and their eruptions. The hydrostatic pressure at submarine vents was long thought to preclude submarine explosive eruptions, until recent exploration with submersibles revealed that widespread volcaniclastic deposits bearing striking similarity to the products of subaerial explosive eruptions are found to great depths in all the world’s oceans. This has inspired the current investigation into the relative roles of magmatic degassing and magma-water interaction that permit submarine basalt explosivity in the deep sea. Lō`ihi Seamount is the youngest and southernmost active volcano in the Hawaiian- Emperor Volcanic Chain. Its ~1 km deep summit plateau is home to many different volcaniclastic and pyroclastic deposits. A sampling-focused submersible dive series to Lō`ihi in 2006 provided the material for this study, which is divided into three parts, covering: Poseidic scoria cones, primary pyroclastic deposit L8, and limu o Pele. The “Poseidic” name is introduced for an end-member style of submarine basalt explosivity identified by measurable features of pyroclasts from two scoria cones on Lō`ihi’s summit plateau. Vesicle textures in lapilli, dissolved volatiles in matrix glasses and olivine hosted glass inclusions, and fine ash morphology, are used to constrain this uniquely submarine, cone-forming style of eruption. The Poseidic eruption style involves cooperative processes of strongly volatile-coupled degassing and hydromagmatic fragmentation, that challenge traditional assumptions about depth limitations to these processes. A bedded, primary pyroclastic deposit (“L8”), exposed in a fault scarp on Lō`ihi’s summit plateau allowed a series of samples to be collected upward through a volcaniclastic sequence. The bedding characteristics, clast vesicularities, microtextures, and geochemistry through the stratigraphy of this deposit indicate that the magma experienced variable ascent rates, and complex cooling regimes in the conduit. Deep-sea limu o Pele, shards of basaltic glass commonly described as “bubble walls,” were found concentrated in ash lenses interbedded with thin lava sheets, and separated from an overlying volcaniclastic sequence by a discontinuity. Different theories have been presented about how these enigmatic particles form, either by hydrovolcanic volcanism, when submarine lava flows entrap and vaporise seawater, or by Strombolian-like explosive eruptions. The geometry and geochemistry of the Lō`ihi deposit provides compelling evidence for a hydrovolcanic, sheet-flow related origin. Theoretical considerations are presented to demonstrate that this process is viable even below the critical depth of seawater, where limu formation is driven by supercritical water, rather than water vapour. Submarine explosive eruptions are usually described by analogy to classical subaerial eruption styles, and many key eruption style-determining processes have previously only been treated theoretically. The robust samples collected for this study, and the detailed treatment of them, shows: (1) that submarine explosive eruptions are different from subaerial ones in almost all ways; (2) that many classical theories about what is and what is not possible at submarine volcanoes need constant reevaluation as new data become available; and (3) that the textures and chemistry of submarine pyroclasts can be used to rigorously determine eruption styles.
Date: 2009-09-30
Advisor: White, James D. L.
Degree Name: PhD
Degree Discipline: Geology
Research Type: Thesis