In Defense of Naturalism 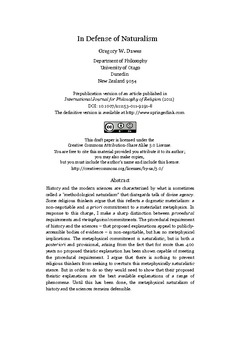 10.1007/s11153-011-9291-8
Cite this item: Dawes, G. W. (2011). In Defense of Naturalism. International Journal for Philosophy of Religion, 70(1), 2–25. doi:10.1007/s11153-011-9291-8
Permanent link to OUR Archive version: http://hdl.handle.net/10523/2458
Abstract:
History and the modern sciences are characterized by what is sometimes called a “methodological naturalism” that disregards talk of divine agency. Some religious thinkers argue that this reflects a dogmatic materialism: a non-negotiable and a priori commitment to a materialist metaphysics. In response to this charge, I make a sharp distinction between procedural requirements and metaphysical commitments. The procedural requirement of history and the sciences—that proposed explanations appeal to publicly-accessible bodies of evidence—is non-negotiable, but has no metaphysical implications. The metaphysical commitment is naturalistic, but is both a posteriori and provisional, arising from the fact that for more than 400 years no proposed theistic explanation has been shown capable of meeting the procedural requirement. I argue that there is nothing to prevent religious thinkers from seeking to overturn this metaphysically naturalistic stance. But in order to do so they would need to show that their proposed theistic explanations are the best available explanations of a range of phenomena. Until this has been done, the metaphysical naturalism of history and the sciences remains defensible.
Date: 2011
Publisher: Springer
Pages: 2-25
Rights Statement: An author may self-archive an author-created version of his/her article on his/her own website and/or the repository of Author's department or faculty. Author may also deposit this version on his/her funder's or funder's designated repository at the funder's request or as a result of a legal obligation, provided it is not made publicly available until 12 months after official publication by Springer. He/she may not use the publisher's PDF version, which is posted on www.springerlink.com, for the purpose of self-archiving or deposit. Furthermore, Author may only post his/her own version, provided acknowledgement is given to the original source of publication and a link is inserted to the published article on Springer's website. The link must be accompanied by the following text: "The final publication is available at www.springerlink.com".
Keywords: naturalism; science and religion; inference to the best explanation
Research Type: Journal Article

Except where otherwise noted, this item's licence is described as Attribution-ShareAlike 3.0 New Zealand