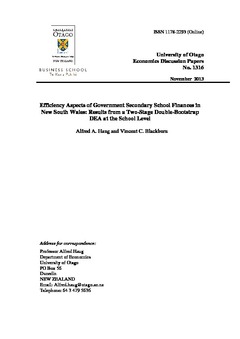 DP_1316.pdf (289.3Kb)
Cite this item: Haug, A. A., & Blackburn, V. C. (2013). Efficiency Aspects of Government Secondary School Finances in New South Wales: Results from a Two-Stage Double-Bootstrap DEA at the School Level (Economics Discussion Papers No. 1316). University of Otago. Retrieved from http://hdl.handle.net/10523/4566
Permanent link to OUR Archive version: http://hdl.handle.net/10523/4566
Abstract:
This study measures the efficiency of government secondary schools in New South Wales, Australia, using a recently developed methodology of two-stage semi-parametric modeling. In contrast to previous research comparing school performance, we control for prior academic achievement of students by looking at the changes in academic achievements over a two year period, at the school level, from 2008 to 2010, and employ detailed financial data for deriving the envelope for the production frontier of the schools. Using Simar and Wilson’s (2007) double bootstrap procedure for data envelopment analysis (DEA), the study finds that schools with higher student retention rates, higher total student numbers, boys or girls only, and selective admissions do better than other schools. On the other hand, a negative influence comes from a school’s location in provincial and outer metropolitan areas, a higher ratio of disadvantaged students at a school, and a school’s specialization in areas such as languages, performing arts, sports, etc. A surprising result is that the socio-economic characteristics of the families of students attending the school has no significant effect on their academic performance, nor does the average of the years of service of the teachers at a specific school.
Date: 2013-11
Publisher: University of Otago
Series: Economics Discussion Papers Series
Series number: 1316
ISSN: 1178-2293 (Online)
Keywords: Two-stage data envelopment analysis; double-bootstrap; efficiency of high schools in New South Wales, Australia
Research Type: Discussion Paper
Languages: English

Except where otherwise noted, this item's licence is described as Attribution-NonCommercial-ShareAlike 3.0 Unported