Census of Alexander Shaw's Catalogue of the Different Specimens of Cloth in the three voyages of Captain Cook to the Southern Hemisphere, 1787 (2015) 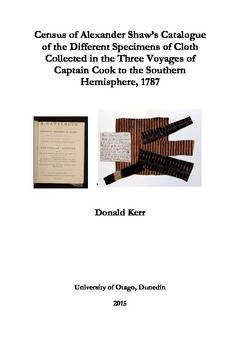 Cook's Tapa Cloth2015VersionThree.pdf (749.0Kb)
Cite this item: Kerr, D. (2015). Census of Alexander Shaw’s Catalogue of the Different Specimens of Cloth in the three voyages of Captain Cook to the Southern Hemisphere, 1787 (2015) (Working Paper). Retrieved from http://hdl.handle.net/10523/4573
Permanent link to OUR Archive version: http://hdl.handle.net/10523/4573
Abstract:
This is an attempt to corral all known copies of Alexander Shaw's Tapa Cloth book (1787) held in institutions around the world. My main objective was to track down institutional copies of Shaw’s work so that scholars in the field could pin-point actual copies at actual libraries and museums and thereby conduct further research on this important Pacific publication. Thus to date (January 2015), 66 copies have been noted, which includes 57 institutional copies, five privately owned copies, one still in a dealer’s hands, and three that remain mysteriously out there: the Keith-Cox copy sold through Christie’s and which does not match provenance description supplied; the Sandwell (Vancouver) copy, supposedly bound in a modern 20th century binding and bought by Richard Sandwell from an American paper industrialist in 2005; and the copy once owned by Dr T. M. Hocken (Dunedin). As I mentioned in the first draft, it is a pleasing increase from the traditional ‘45’ known copies.
Date: 2015
Research Type: Working Paper
Languages: English

Except where otherwise noted, this item's licence is described as Attribution-NonCommercial-ShareAlike 3.0 Unported