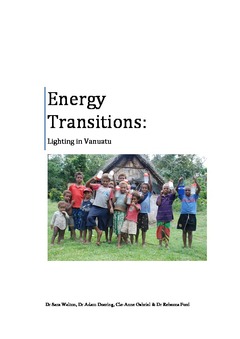 Energy Transitions - Lighting Vanuatu.pdf (1.262Mb)
Cite this item: Walton, S., Doering, A., Gabriel, C.-A., & Ford, R. (2014). Energy Transitions: Lighting in Vanuatu (Project Report). Retrieved from http://hdl.handle.net/10523/4859
Permanent link to OUR Archive version: http://hdl.handle.net/10523/4859
Abstract:
Lighting Vanuatu began in 2010 as a two-year project funded through The Australian Aid - Governance for Growth Programme. The primary objective of the project was to increase access of portable solar lanterns for rural Vanuatu communities in an effort to reduce their dependency on kerosene as the primary source of household lighting. To achieve this goal the project offered a supply-side subsidy for two Vanuatu NGOs (ACTIV and VANREPA) to support the distribution of 24, 000 solar lamps mainly to rural areas. The subsidy was aimed at improving bulk purchasing power by the NGO’s in an effort to reduce the price of the imported solar lights at the household level. The analysis of the Independent Completion Review (ICR), Business Case Study (Annex 1), and the Survey Data Overview (Annex 3) indicate that the Lighting Vanuatu project has been successful in enabling the uptake and awareness of portable solar lighting products. These reports highlight that the transition from kerosene lamps to solar throughout the islands of Vanuatu was both clear and ubiquitous. When framed at this descriptive level, the project certainly presents a good news story for renewable energy. The rapid transformation from a non-renewable to a renewable source of lighting within a 2 to 3 year period runs counter to many of the discussions in developed countries who struggle to disrupt the locked-in energy systems that sustain and maintain a reliance on fossil fuels. Considered alongside the slow and politically infused renewable energy debates in the developed country context, Vanuatu’s rapid adoption of portable solar lighting is precisely the kind of transitional story that many communities could only dream of achieving. However, the successful or unsuccessful acquisition and diffusion of a particular piece of technology – portable solar lamps – is only part of the story. The initial aim of the Independent Completion Review (ICR) was to identify the degree of adoption and contribution made by Lighting Vanuatu, any geographic, social or cultural trends evident in adoption patterns, any economic or social benefits, specific changes in the lighting technology used by households, changes in household practices associated with any shift in technology, and changes in householders’ perceived needs and aspirations with regard to lighting. While this descriptive analysis is essential for evaluating the success of the programme within its own terms (i.e. the ICR), the broader cultural, economic and political implications of this technological diffusion have yet to be addressed. The purpose of Annex 2, therefore, is to develop the Lighting Vanuatu story further by offering a more nuanced interpretation of the transition from kerosene to portable solar lights in rural Vanuatu communities; our emphasis and focus is different to that of the ICR, but complements and enhances the understanding of Lighting Vanuatu as an aid project. We begin by outlining the methodology used to gather and interpret the information that informs this report. We then draw on the Energy Cultures Framework (Stephenson et al., 2010) as an organising structure for describing Vanuatu’s prevailing energy culture. Next, we address four key debates to emerge from the fieldwork with the hope of encouraging a reflection on the shifting social norms and practices (economic and political) that are also ‘diffused’ with the introduction of a new piece of material culture like the portable solar lamps. The annex concludes with a comment on the implications of this analysis for future energy-related development projects in Vanuatu.
Date: 2014
Keywords: Energy; Energy Cultures; Lighting; Vanuatu; Solar Lamps; renewable source of lighting
Research Type: Project Report
Languages: English