Photovoltaic (PV) Uptake in NZ: The story so far 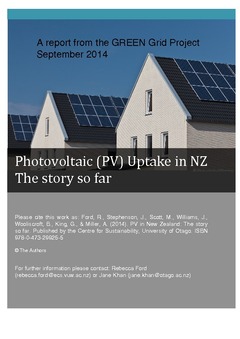 PV Uptake in NZ The story so far 140917.pdf (5.968Mb)
Cite this item: Ford, R., Stephenson, J., Scott, M., Williams, J., Wooliscroft, B., King, G., & Miller, A. (2014, September). Photovoltaic (PV) Uptake in NZ: The story so far. Centre for Sustainability, University of Otago.
Permanent link to OUR Archive version: http://hdl.handle.net/10523/4992
Abstract:
New Zealand’s electricity infrastructure was designed to support the flow of energy from large centralised power stations toward end users, including households and businesses. However, a shift to a more distributed supply may be beginning with the growing interest in small-scale photovoltaic (PV) solar generation. In the last 2 years alone the quantity of grid-connected small-scale PV systems in NZ has grown by at least 330%. . Although PV installations to date are relatively few, such that the current installed capacity is about one-tenth that of Meridian’s West Wind power station near Wellington, a continuation of the growth that can be seen in this market (Figure 1) could have substantial impact. While the current installed PV capacity per capita is still relatively low compared to some other countries3 (most likely due to the subsidies through attractive feed-in tariffs), the rate of uptake is of great interest given the absence of Government incentives for small-scale PV installations, along with the relatively high cost to implement4. It is important to understand the drivers of PV uptake (i.e. the reasons for the rapid increase in PV installations), and whether PV is likely to remain niche or become even more widespread. To investigate these issues we have undertaken three separate research streams. We have carried out interviews5 with people who have already purchased (or who have a strong interest to purchase) PV systems both nationally (20 people) and within Blueskin Bay (18 people), a small region of the country with relatively high interest in PV. We have run an online questionnaire and choice modelling experiment6 with 2000 people (1000 of whom we questioned about PV), and we have responses to a national household energy survey of 2700 households around New Zealand. This report draws from all three studies to provide an update of our high-level findings to date. This is an early-stage report and further detailed analysis and reporting will follow.
Date: 2014-09
Publisher: Centre for Sustainability, University of Otago
ISBN: 978-0-473-29925-5
Keywords: Photovoltaic uptake; New Zealand electricity grid; barriers to uptake of Photovoltaic (PV)
Research Type: Project Report
Languages: English
Notes:
Copyright The Authors