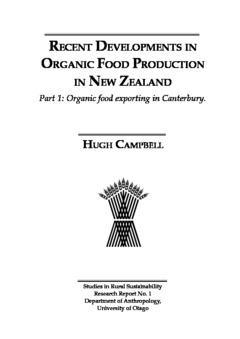 Canterbury.pdf (234.7Kb)
Cite this item: Campbell, H. (1996). Recent Developments in Organic Food Production in New Zealand: Part 1: Organic Food Exporting in Canterbury (Studies in Rural Sustainability Research Report No. 1). University of Otago. Retrieved from http://hdl.handle.net/10523/5320
Permanent link to OUR Archive version: http://hdl.handle.net/10523/5320
Abstract:
Since 1990, the exporting of certified organic produce has emerged as a new industry in New Zealand. Five provinces – Canterbury, Gisborne, Bay of Plenty, Hawkes Bay and Manawatu – provide the majority of exports with two business organisations – the Kiwifruit Marketing Board, and Wattie Frozen Foods Ltd. – being prominent in this. In 1990, a MAF report (MAF 1991) estimated that the total value of organic production in New Zealand (primarily directed at the domestic market) was around NZ$1.1 million. Since that time there has been a massive increase in the value of organic production, and in the 1995/ 96 year, the newly formed Organic Products Exporting Group assessed the export value of its members at NZ$12 million. Given that this ignored those few organisations outside the group and also did not assess the size of the domestic market, it could be conservatively estimated that the total annual value of organic product in New Zealand was NZ$15 million by 1996. While this figure is not large by comparison to some of New Zealand’s established export industries it is still around 25% of the export value of wine – one of the most high profile new primary production sectors in New Zealand.
Date: 1996
Publisher: University of Otago
Series: Studies in Rural Sustainability Research Report
Series number: 1
ISBN: 0-9597911-2-4
Keywords: Organic agriculture; New Zealand; exports; frozen; Heinz-Watties ltd.; vegetables
Research Type: Commissioned Report for External Body
Languages: English