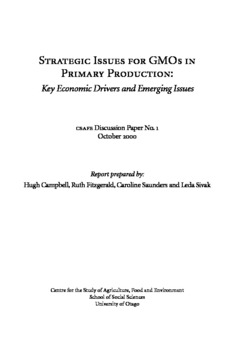 CSAFE Disc.pdf (499.6Kb)
Cite this item: Campbell, H., Fitzgerald, R., Saunders, C., & Sivak, L. (2000). Strategic Issues for GMOs in Primary Production: Key Economic Drivers and Emerging Issues (Discussion Paper). University of Otago. Retrieved from http://hdl.handle.net/10523/5323
Permanent link to OUR Archive version: http://hdl.handle.net/10523/5323
Abstract:
The Warrant of the Royal Commission of Enquiry into Genetic Modification asks a range of questions about the kinds of consequences (health, environmental, legal, cultural, ethical and economic) that might occur should GM technologies be commercially released in New Zealand. These are important questions, as New Zealand is one of only a few countries that rely on food exports to generate a major proportion of national revenue, but which have not yet released GMOs into commercial production of food, fibre or nutriceuticals. Focussing specifically on the economic consequences of commercial GM production, there is clearly both an opportunity for unique economic outcomes that must be considered, and also a series of major methodological challenges surrounding how we might quantify the nature of these opportunities given that such an exercise is entirely predictive (ie. we have no actual commercial production of GMOs to evaluate). This difficulty is evidenced by the level of claims-making taking place about the potential economic value to New Zealand of either avoiding or encouraging GM technologies in commercial production of food, fibre and nutriceuticals. There are clearly few certainties in this discussion. The New York Times reported in 1999 that even Monsanto had hired a group of independent consultants to try and estimate the nature of the biotechnology landscape in several decades time (‘Plotting Corporate Futures: Outlining What Could Go Wrong’ New York Times: 24/6/99). The consultants drew up three scenarios – one reasonably positive, one uncertain and contingent on the outcomes of many unpredictable variables, and one primarily negative for GM food. However, they were unable to recommend which one they considered the most likely to happen. Such caution is scarcely reflected in some of the recent claims-making in public fora about the presumed benefits and disadvantages of either a biotechnologically- driven or GM-free economic future for New Zealand.
Date: 2000
Publisher: University of Otago
Keywords: GMOs; New Zealand; Royal Commission on GMOs; risk; Anthropology; Archaeology
Research Type: Discussion Paper
Languages: English