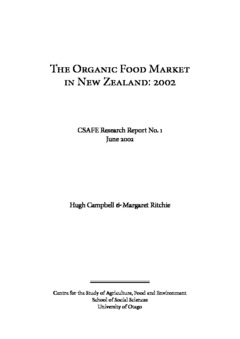 CSAFE_2.pdf (366.0Kb)
Cite this item: Campbell, H., & Ritchie, M. (2002). The Organic Food Market in New Zealand: 2002 (CSAFE Research Report No. 1). University of Otago. Retrieved from http://hdl.handle.net/10523/5324
Permanent link to OUR Archive version: http://hdl.handle.net/10523/5324
Abstract:
While the general area of organic agriculture and food consumption has become a major point of interest for industry, policy bodies and the general public, it is not an area that has traditionally been well served with economic data. Commenting in 1997, Saunders et al. (1997) noted that the volume and comparability of organic economic data was of very poor quality. Since that time, however, a number of data sources have emerged. The Foreign Agricultural Service of the USDA has commenced a compilation of organic market data on over 20 key markets for US agricultural exports. Yussefi and Willer (2002) also commenced a global analysis of the organic food market. This has considerably strengthened knowledge of growth trends in the global organic market. In New Zealand there are two key bodies of data collection that have emerged since 1997. First, the Organic Products Exporters of New Zealand (OPENZ – formerly OPEG) has commissioned an annual survey of certified organic food exports among its members. This provides some data on the volume and growth rate of organic food exports in New Zealand. A second body of data is reported here and represents the ongoing findings of a repeated survey of organic food retailing in Dunedin (and by extrapolation New Zealand) conducted by csafe at the University of Otago. This survey was first conducted in March 1997 (see Campbell 1999), and then repeated in December 1999/January 2000 (see Ritchie et al 2000), and again in January/February 2002. This report will discuss these new survey results, and briefly revue how the changes that are occurring in Dunedin relate to the national organic market and to trends in the international organic food market.
Date: 2002
Publisher: University of Otago
Series: CSAFE Research Report
Series number: 1
Keywords: Organic food; organic market; domestic; export; New Zealand
Research Type: Commissioned Report for External Body
Languages: English