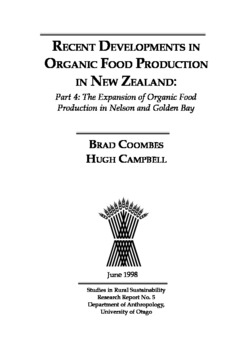 Nelson Report #5.pdf (346.3Kb)
Cite this item: Coombs, B., & Campbell, H. (1998). Recent Developments in Organic Food Production in New Zealand: Part 4: The Expansion of Organic Food Production in Nelson and Golden Bay (Studies in Rural Sustainability Research Report No. 5). University of Otago. Retrieved from http://hdl.handle.net/10523/5328
Permanent link to OUR Archive version: http://hdl.handle.net/10523/5328
Abstract:
This report presents the fourth and final case study in a program of research on the changes within organic production in key regional areas of New Zealand. The four reports are the results of a body of research funded by the Public Good Science Fund and titled ‘Optimum Development of Certified Organic Horticulture in New Zealand’. Specifically, the present report examines the evolution of organic production in the Nelson/Golden Bay1 area of the South Island. During the early 1980s, inhabitants of that area were some of the first in New Zealand to become involved in sales of organic produce, with an even longer history of non-commercial, self-sufficiency oriented organic production. In this historical respect, the area stands in contrast to some of the other regions examined in the current series of reports. Of the other three, it is most similar to the situation in Canterbury (Campbell 1996), where organics also started in the domestic and informal sectors of the economy. However, while the domestic component of organics has grown in Canterbury, it has also become secondary in terms of both volume and value to the organic goods exported from that region. It is the lack of a sizeable export organic industry in Nelson which has drawn the attention of the current authors. Organic wine/grapes (Vitus vinifera), hops (Humulus lupulus), kiwifruit (Actinidia deliciosa), nashi (Pyrus pyrifolia) and bee products are exported from the Nelson region but their volume is relatively small when placed alongside the volume of exports in other organic producing areas with a similar number of producers. The relative absence of organic exporting means that the structure of the organic industry in Nelson is radically different from that in the export oriented Bay of Plenty (Campbell et al. 1997) and Gisborne District (Coombes et al. 1998). In the latter case, there is almost no sign of a domestic industry, this highlighting the differing extremes of regionalisation in New Zealand’s organic industry. While these comparisons are interesting, and while they will be made at various points throughout this report, extensive comparisons have been set aside for a future publication devoted singularly to that task.
Date: 1998
Publisher: University of Otago
Series: Studies in Rural Sustainability Research Report
Series number: 5
ISBN: 0-9582015-1-X
Keywords: Organic agriculture; New Zealand; fruit; IPM
Research Type: Commissioned Report for External Body
Languages: English