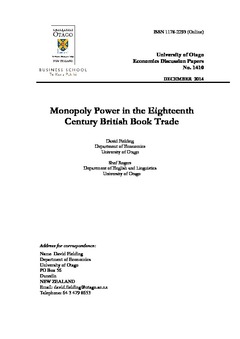 DP_1410.pdf (487.1Kb)
Cite this item: Fielding, D., & Rogers, S. (2014). Monopoly Power in the Eighteenth Century British Book Trade (Economics Discussion Papers Series No. 1410). University of Otago. Retrieved from http://hdl.handle.net/10523/5395
Permanent link to OUR Archive version: http://hdl.handle.net/10523/5395
Abstract:
In conventional wisdom, the reform of British copyright law during the eighteenth century brought an end to the monopoly on the sale of books held by the Stationers’ Company, and the resulting competition was one of the driving forces behind the expansion of British book production during the Enlightenment. In this paper, we analyze a new dataset on eighteenth century book prices and author payments, showing that the legal reform brought about only a temporary increase in competition. The data suggest that by the end of the century, informal collusion between publishers had replaced the legal monopoly powers in place at the beginning of the century. The monopoly power of retailers is not so easily undermined.
Date: 2014-12
Publisher: University of Otago
Series: Economics Discussion Papers Series
Series number: 1410
ISSN: 1178-2293 (Online)
Keywords: book trade; publishing; copyright; retail monopoly
Research Type: Discussion Paper
Languages: English