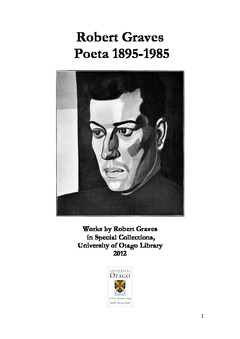 Main article (5.759Mb)
Cite this item: Kerr, D. (2012). Robert Graves: Poeta 1895-1985. Works by Robert Graves in Special Collections, University of Otago Library (Working Paper). Retrieved from http://hdl.handle.net/10523/5649
Permanent link to OUR Archive version: http://hdl.handle.net/10523/5649
Abstract:
On the headstone that marks his grave at Deyá, Marjorca, there is the simple: ‘Robert Graves Poeta 1895-1985’. And it was this aspect that attracted Charles Brasch, editor, patron and poet, to the works of Graves, calling him ‘among the finest English poets of our time, one of the few who is likely to be remembered as a poet.’ Indeed, not only did Brasch collect his own first editions volumes written by Graves, but he encouraged the University of Otago Library to buy more. Thanks to Brasch, Special Collections at the University of Otago now has an extensive collection of works (poetry, novels, essays, children’s books) by him. Born at Wimbledon in 1895, Graves had an Irish father, a German mother, an English upbringing, and a classical education. Enlisting in the Royal Welch Fusiliers, Graves faced the horrors of World War I. He was wounded by shrapnel, left for dead and later able to read his own obituary in The London Times. In 1929, he penned Goodbye To All That, his war-time autobiography which gave him success and fame. And aside from his regular output of poetry books, he wrote historical novels such as I Claudius (1934) and Claudius the God (1934), The White Goddess (1948), the heady study on matriarchal worship and poetry that in the sixties became a source book for readers of the Whole Earth Catalog, and the very successful The Greek Myths (1955). By 1975, effectively the end of his writing career, he had written a total of some 135 books, including The Golden Fleece (1944), Seven Days in New Crete (1949), his critical The Crowning Privilege (1956) and Oxford Addresses on Poetry (1964), and Collected Poems of 1975. If nothing else is claimed for him, this unkempt (thick curly hair, broken nose, an irregular face), honest, independent, sometimes truculent, unorthodox romantic wrote for a living and to support himself as a poet. The Robert Graves Collection in Special Collections consists of first and second editions, signed limited publications, reprints, translations, and illustrative editions, all of which reveal the full scope and range of topics that Graves dealt with. They also reflect his sheer industry. And there is the all-important poetry, at first about the war, then to the three loves of his life: Nancy Nicholson, Laura Riding, and Beryl Pritchard. The collection is by no means complete, and when possible volumes will be added to it. To date, there are no manuscripts.
Date: 2012
Keywords: Robert Graves, poetry, Special Collections
Research Type: Working Paper
Languages: English