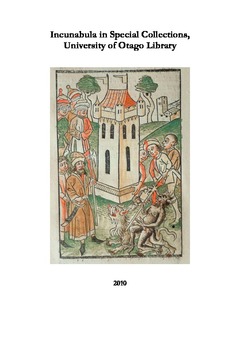 OtagoFINALINKIE.pdf (8.947Mb)
Cite this item: Kerr, D. (2010). Incunabula in Special Collections, University of Otago Library (Working Paper). Retrieved from http://hdl.handle.net/10523/5650
Permanent link to OUR Archive version: http://hdl.handle.net/10523/5650
Abstract:
Special Collections, University of Otago Library, houses 42 examples of pre-1501 early printed books that represent 15th century printmanship from Italy, German, Switzerland, and France. There is one highly unusual English sample: four binding fragments printed by William Caxton, and John Lettou, about 1480 and bound in a 1481 edition of Nicolas de Lyra’s Commentaria in bibliam (no.7). There is a selection of printers, ranging from Johann Amerbach, Peter Drach, Ulrich Han, and Georg Husner to Anton Koberger, Aldus Manuitus, Johann Mentelin, and Johannes Trechsel. Operating from European towns such as Basel, Speyer, Rome, Strassburg, Nuremberg, Venice, Strassburg, and Lyon, their productions reflect their expertise and resources in this burgeoning industry. Typefaces, style, and quality of printing and bookmaking also vary. Indeed, the collection contains items that are typographical masterpieces (no. 7); others are downright pedestrian. Barring one book in German and another in Latin and Greek, all of the other books are in Latin, the predominant language for the printed word before 1500. Given that most of the books are tied to established bibliographies, the descriptions attached are brief. However, the descriptions are grounded in the books at Otago, especially to condition and provenance. There has been some modernization of letters. References used follow the catalogue listing, as do printer and location indexes. Images accompany most entries, offering a brief glimpse of the book and its make-up. They highlight bindings, decorations such as woodcut initials and illustrations, title-page samples, rubrications, typefaces, colophons and printer’s devices, and provenance and bibliographical information (often on endpapers). Notable highlights include Liber chronicarum (The Nuremberg Chronicle, 1493), Boccaccio’s De genealogiae deorum gentilium, an encyclopedia of pagan gods, a book of medical aphorisms translated from Arabic in to Latin (1484), the Aldine printing of Institutiones Graecae Grammaticae (1497), and a leaf of the Nuremberg Bible, printed by Anton Koberger, 1483. The prime purpose of this descriptive list is to raise the awareness of the existence of these books in New Zealand (and at the University of Otago, Dunedin) and encourage scholarly use in them. Like their vellum counter-parts, the medieval manuscripts, these survivors of a bygone age have their own distinct beauty and specific usefulness, be it textual or physical. They stand as very useful resources, especially to Early Modern scholars. Special thanks to Dr Christopher de Hamel (Parker Library, Cambridge); John Goldfinch (British Library); Dr Falk Eisermann (State Library, Berlin); Klaus Graf (University of Freiburg), Michael Laird (Texas), Bettina Wagner (Bavarian State Library, Munich); and Anthony Tedeschi (University of Melbourne Special Collections). No list is without flaws. To this end, feedback is appreciated, either through email, letter, or in person. I welcome comments and suggestions.
Date: 2010
Keywords: Incunabula, Special Collections
Research Type: Working Paper
Languages: English