The Lion on the Move Towards the World Frontier: Catching Up or Remaining Stuck? 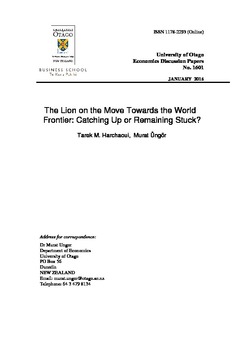 DP_1601.pdf (490.0Kb)
Cite this item: Ungor, M., & Harchaoui, T. M. (2016). The Lion on the Move Towards the World Frontier: Catching Up or Remaining Stuck? (Economics Discussion Papers No. 1601). University of Otago. Retrieved from http://hdl.handle.net/10523/6187
Permanent link to OUR Archive version: http://hdl.handle.net/10523/6187
Abstract:
The remarkable growth spurt reported by the Sub-Saharan African (SSA) economy since the mid-1990s offers the opportunity to revisit the narrative of its economic development experience. We investigate whether the SSA economy has initiated a gradual process of convergence which reverses the long-term fall so far behind the U.S. frontier. Our framework begins with a top-down approach that performs a nested development accounting exercise. This aggregate analysis complements a bottom-up approach that tracks the sectoral origins of the SSA aggregate relative labor productivity performance. The application of this framework to a representative sample of the SSA economy over the 1970-2010 period suggests the following set of results. After one-quarter of a century of falling behind the U.S. level of real income per capita, the SSA economy observed a swift turnaround towards the end of the 1990s, yet without showing any sign of catch-up. Second, parallel to favorable demographic developments, SSA reports a startling relative labor productivity gap which accounts for much of its relative income per capita gap. Third, the use of the concept of cognitive skills reveals that human capital considerations have worsened o_ over time, making total factor productivity no longer the biggest part of the story underlying relative labor productivity differences. Fourth, the sectoral evidence points to the coexistence of headwinds (negative within- and reallocation-effects) and tailwinds (between-effects) which tend to cancel out each other, thus preventing SSA aggregate economic performance to get anywhere closer to the world frontier even during the growth spurt period.
Date: 2016-01
Publisher: University of Otago
Series: Economics Discussion Papers Series
Series number: 1601
ISSN: 1178-2293
Keywords: Convergence; productivity; capital formation; structural change
Research Type: Discussion Paper
Languages: English