Those "Other Sociologists": Social Analysis Before Sociology 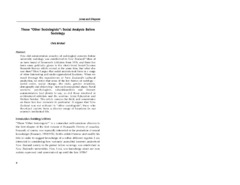 Brickell(2007)OtherSociologistsSocialAnalysisBeforeSociology.pdf (811.4Kb)
Cite this item: Brickell, C. (2007). Those ‘Other Sociologists’: Social Analysis Before Sociology. New Zealand Sociology, 22(2), 195–218.
Permanent link to OUR Archive version: http://hdl.handle.net/10523/6518
Abstract:
How did commentators conceive of sociological concerns before university sociology was established in New Zealand? Most of us have heard of Somerset’s Littledene from 1938, and there has been some publicity given to the short‐lived Social Science Research Bureau which existed at the same time, but what else was there? Here I argue that social analysis took form in a range of other interesting and under‐appreciated locations. When we trawl through the repositories of New Zealand’s cultural production, we notice that some of the key themes of sociology – social order, social change, the state, gender relations, demography and citizenship – turn up in unexpected places. Social workers, psychologists, educationalists and literary commentators had plenty to say, as did those involved in architectural criticism and the wartime Army Education and Welfare Service. This article surveys the field, and concentrates on these last two elements in particular. It argues that New Zealand was not without its “other sociologists”; those who theorized society from a diverse range of locations in our country’s intellectual life.
Date: 2007
Publisher: MASSEY UNIVERSITY
Pages: 195-218
Rights Statement: For permission to reproduce or use information on this website beyond this limited licence, permission must be sought from the University through the relevant Content Authoriser, as identified on the relevant web page.
Keywords: sociology; history; social theory; New Zealand
Research Type: Journal Article
Languages: English