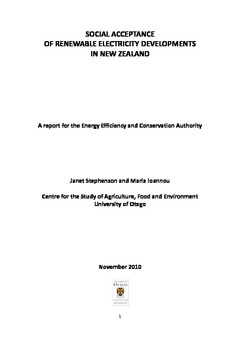 SARENZ REPORT 2010.pdf (2.220Mb)
Cite this item: Stephenson, J., & Loannou, M. (2010). SOCIAL ACCEPTANCE OF RENEWABLE ELECTRICITY DEVELOPMENTS IN NEW ZEALAND (Commissioned Report for External Body). Centre for Sustainability, University of Otago. Retrieved from http://hdl.handle.net/10523/6593
Permanent link to OUR Archive version: http://hdl.handle.net/10523/6593
Abstract:
This report, and the research which informs it, was commissioned by the Energy Efficiency and Conservation Authority (EECA). Its purpose is to examine whether societal acceptance issues are significantly limiting the establishment of new REG projects, and to identify the key characteristics of social acceptance/resistance to REG in the New Zealand context. It draws inspiration in part from the Create Acceptance7 project (part of the European Commission’s Sixth Framework Programme) which set out to examine why in practice many renewable energy projects in Europe were facing strong resistance from stakeholders8, often proving to be a far bigger stumbling block than either technology or costs.9 Create Acceptance (Cultural Influences on Renewable Energy Acceptance and Tools for the development of communication strategies to promotE ACCEPTANCE among key actor groups) was particularly focused on the adoption of new energy technologies and practices (including household energy efficiency, biofuels, solar energy, bio-energy and carbon capture and storage) and aimed to help those implementing innovative new energy technologies to deal with societal acceptance issues. Subsequently, a tool (labelled ESTEEM10) was developed to assist in acceptance of new and innovative REG projects by applying a structured process, facilitated by an external consultant, to identify stakeholders and to work with the project manager to resolve potential issues at an early stage in the process. However, conditions in Europe are not the same as in New Zealand, and it is unclear whether such a tool is needed in New Zealand, nor indeed whether a lack of social acceptance is causing problems for achieving targets for the types of REG that are occurring in NZ. This project therefore sets out to examine social acceptance of REG technologies being utilised in the New Zealand situation. It aims to establish some empirical and qualitative evidence of acceptance (and resistance) relating to renewable electricity generation projects (hydro dams, wind farms, geothermal and marine energy) over the past 10 years. The study also seeks to identify what types of socially determined issues pose significant barriers for REG projects, and whether this differs between types of electricity generation.
Date: 2010-11
Publisher: Centre for Sustainability, University of Otago
Rights Statement: Copyright The Authors
Keywords: Social acceptance; Renewable electricity; New Zealand; renewable electricity generation; Reg
Research Type: Commissioned Report for External Body
Languages: English
Notes:
A report for the Energy Efficiency and Conservation Authority