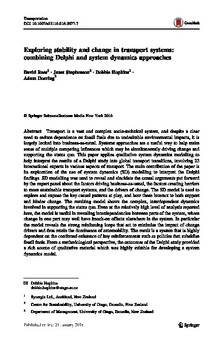 DOI 10.1007/s11116-016-9677-7
Cite this item: Rees, D., Stephenson, J., Hopkins, D., & Doering, A. (2016). Exploring stability and change in transport systems: combining Delphi and system dynamics approaches. Transportation, Published online 21 January 2016. doi:DOI 10.1007/s11116-016-9677-7
Permanent link to OUR Archive version: http://hdl.handle.net/10523/6595
Abstract:
Transport is a vast and complex socio-technical system, and despite a clear need to reduce dependence on fossil fuels due to undesirable environmental impacts, it is largely locked into business-as-usual. Systems approaches are a useful way to help make sense of multiple competing inﬂuences which may be simultaneously driving change and supporting the status quo. This paper applies qualitative system dynamics modelling to help interpret the results of a Delphi study into global transport transitions, involving 22 international experts in various aspects of transport. The main contribution of the paper is its exploration of the use of system dynamics (SD) modelling to interpret the Delphi ﬁndings. SD modelling was used to reveal and elucidate the causal arguments put forward by the expert panel about the factors driving business-as-usual, the factors creating barriers to more sustainable transport systems, and the drivers of change. The SD model is used to explore and expose the key causal patterns at play, and how these interact to both support and hinder change. The resulting model shows the complex, interdependent dynamics involved in supporting the status quo. Even at the relatively high level of analysis reported here,the model is useful in revealing interdependencies between parts of the system,where change in one part may well have knock-on effects elsewhere in the system. In particular the model reveals the strong reinforcing loops that act to minimise the impact of change drivers and thus retain the dominance of automobility. The result is a system that is highly dependent on the continued existence of key reinforcements such as policies that subsidise fossil fuels.From a methodological perspective,the outcomes of the Delphi study provided a rich source of qualitative material which was highly suitable for developing a system dynamics model.
Date: 2016-01-21
Publisher: Springer
Rights Statement: Copyright Springer Science+Business Media New York 2016
Keywords: System dynamics; Transport; Delphi technique; Causal patterns; Sustainable transport systems
Research Type: Journal Article
Languages: English