Is Zimbabwe More Productive Than the United States? Some Observations From PWT 8.1 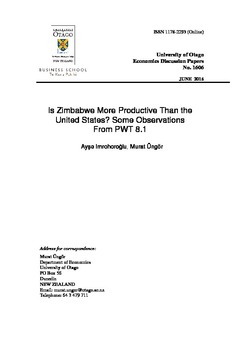 DP_1606.pdf (447.2Kb)
Cite this item: İmrohoroğlu, A., & Üngör, M. (2016). Is Zimbabwe More Productive Than the United States? Some Observations From PWT 8.1 (Economics Discussion Papers Series No. 1606). University of Otago. Retrieved from http://hdl.handle.net/10523/6620
Permanent link to OUR Archive version: http://hdl.handle.net/10523/6620
Abstract:
In Penn World Table (PWT) 8.1, several developing countries stand out as outliers with high total factor productivity (TFP) levels relative to the United States (U.S.). For example, in 2011, Zimbabwe and Trinidad and Tobago are reported to have 3 and 1.6 times higher TFP levels than the U.S., respectively. In addition, for several other countries, such as Turkey and Gabon, the stated levels of TFP are very similar to that of the U.S. level (1.01 and 1.11 times the U.S. levels, respectively). Estimates for some of these countries seem rather unlikely when compared with other measures of productivity (such as output per worker). While in the construction of TFP levels PWT does use country-speci c factor shares we show that their results are very similar to calculating TFP levels with a Cobb-Douglas production function where capital and labor shares are assumed to be the same across all countries, i.e., using a constant labor share of 2/3 for all countries. A simple modi cation, using a constant labor share of 2/3 for developed countries and 1/2 for developing countries, generates more \plausible" estimates for TFP levels.
Date: 2016-06
Publisher: University of Otago
Series: Economics Discussion Papers Series
Series number: 1606
ISSN: 1178-2293
Keywords: Total factor productivity; labor income shares; Penn Tables
Research Type: Discussion Paper
Languages: English