Refugees, Immigration, Multiculturalism, and their Implications for Biculturalism 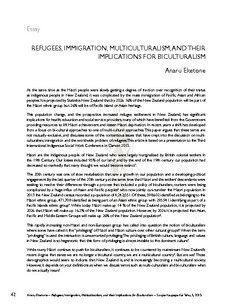 Eketone(2015)Refugees,Immigration,Multiculturalism.pdf (134.1Kb)
Cite this item: Eketone, A. (2015). Refugees, Immigration, Multiculturalism, and their Implications for Biculturalism. Scope Kaupapa Kai Tahu, (3), 42–47.
Permanent link to OUR Archive version: http://hdl.handle.net/10523/6655
Abstract:
At the same time as the Māori people were slowly getting a degree of traction over recognition of their status as indigenous people in New Zealand, it was complicated by the mass immigration of Pacific, Asian and African peoples. It is projected by Statistics New Zealand that by 2026 16% of the New Zealand population will be par t of the Māori ethnic group but 26% will be of Pacific Island or Asian heritage. This population change, and the prospective increased refugee settlement in New Zealand, has significant implications for health, education and social service providers, many of which have benefited from the Government providing resources to lift Māori achievement and lessen Māori deprivation. In recent years a shift has developed from a focus on bi-cultural approaches to one of multi-cultural approaches. This paper argues that these terms are not mutually exclusive, and discusses some of the contentious issues that have crept into the discussion on multi-culturalism, immigration and the worldwide problem of refugees. This article is based on a presentation to the Third International Indigenous Social Work Conference in Darwin 2015.
Date: 2015
Publisher: Otago Polytechnic
Pages: 42-47
ISSN: 2253-1874
Rights Statement: © 2015 all texts are the copyright of authors and all images are the copyright of the artists or other copyright holders. Scope is a non-profit publication with open access online.
Keywords: Multiculturalism; Biculturalism; Immigration; Maori
Research Type: Journal Article
Languages: English