What's for dinner? Relative and absolute differences in food prices 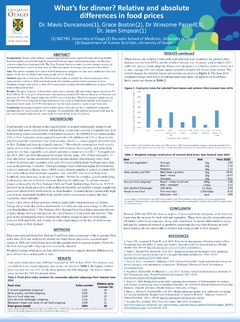 2016 Duncanson Paed Soc FPI A0.pdf (703.7Kb)
Cite this item: Duncanson, M., Boston, G., Parnell, W., & Simpson, J. (2016, November). What’s for dinner? Relative and absolute differences in food prices. Presented at the Paediatric Society of New Zealand 68th Annual Scientific Meeting - The Science of Healing The Art of Medicine.
Permanent link to OUR Archive version: http://hdl.handle.net/10523/6932
Abstract:
Background: Women with children experiencing food insecurity report difficulty affording healthy food and express concern that high fat processed food and sugar sweetened beverages are often less expensive than fresh foods and milk. The New Zealand food price index monitors changes in price of various food items relative to their price in 2006. This presentation will examine how prices of food items have changed over time and consider how this may impact on the diet of children and young people in New Zealand. Methods: Analysis of data from the 2016 Food Price Index to identify for which goods prices have remained most similar to 2006 and which goods have had the greatest relative increase in price. Weighted average retail prices in June 2016 were used to compare absolute differences in price of food items at that point in time. Results: The price of pastry goods such as pies, sausage rolls and custard squares increased 5% from 2006 to 2016, the price of processed meat increased around 10% whereas the price of beef and veal increased by 50%. The largest single rise of 65% was seen for fruit. The least expensive single item in the June 2016 list of weighted average retail prices was white bread and the most expensive items were fresh meats. At $3.98 a hot meat pie was the least expensive item in the ‘ready-to-eat’ food subgroup. Conclusion: Increasing disparities in the relative prices of foods is likely to have contributed to material hardship and food insecurity in New Zealand. For households with children highly processed foods may be the most economic food choices, and may be the only choices available to those living in income poverty.
Date: 2016-11
Conference: Paediatric Society of New Zealand 68th Annual Scientific Meeting - The Science of Healing The Art of Medicine, 16-18 November 2016 Bethlehem College, Tauranga
Keywords: food insecurity; food price index; child health; material hardship
Research Type: Conference or Workshop Item (Poster)
Languages: English
Notes:
Please add to the NZCYES collection