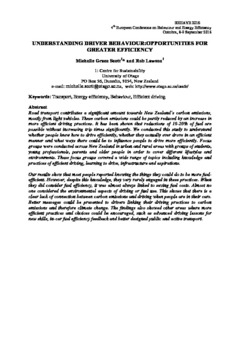 Scott BEHAVE 2016.pdf (402.9Kb)
Cite this item: Scott, M. G., & Lawson, R. (2016). Understanding driver behaviour: opportunities for greater efficiency. In BEHAVE 2016 4th European Conference on Behaviour and Energy Efficiency.
Permanent link to OUR Archive version: http://hdl.handle.net/10523/6976
Abstract:
Road transport contributes a significant amount towards New Zealand’s carbon emissions, mostly from light vehicles. These carbon emissions could be partly reduced by an increase in more efficient driving practices. It has been shown that reductions of 10-20% of fuel are possible without increasing trip times significantly. We conducted this study to understand whether people knew how to drive efficiently, whether they actually ever drove in an efficient manner and what ways there could be to influence people to drive more efficiently. Focus groups were conducted across New Zealand in urban and rural areas with groups of students, young professionals, parents and older people in order to cover different lifestyles and environments. These focus groups covered a wide range of topics including knowledge and practices of efficient driving, learning to drive, infrastructure and aspirations. Our results show that most people reported knowing the things they could do to be more fuel efficient. However, despite this knowledge, they very rarely engaged in these practices. When they did consider fuel efficiency, it was almost always linked to saving fuel costs. Almost no one considered the environmental aspects of driving or fuel use. This shows that there is a clear lack of connection between carbon emissions and driving when people are in their cars. Better messages could be presented to drivers linking their driving practices to carbon emissions and therefore climate change. The findings also showed other areas where more efficient practices and choices could be encouraged, such as advanced driving lessons for new skills, in-car fuel efficiency feedback and better designed public and active transport.
Date: 2016-09
Conference: Coimbra
Rights Statement: Copyright the authors
Keywords: Transport,; Energy efficiency; Behaviour,; Efficient driving
Research Type: Conference or Workshop Item (Paper)
Languages: English