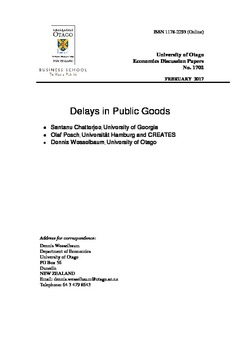 DP_1702.pdf (610.2Kb)
Cite this item: Chatterjee, S., Posch, O., & Wesselbaum, D. (2017). Delays in Public Goods (Economics Discussion Papers Series No. 1702). University of Otago. Retrieved from http://hdl.handle.net/10523/7045
Permanent link to OUR Archive version: http://hdl.handle.net/10523/7045
Abstract:
In this paper, we analyze the consequences of delays and cost overruns typically associated with the provision of public infrastructure in the context of a growing economy. Our results indicate that uncertainty about the arrival of public capital can more than offset its positive spillovers for private-sector productivity. In a decentralized economy, unanticipated delays in the provision of public capital generate too much consumption and too little private investment relative to the first-best optimum. The characterization of the first-best optimum is also affected: facing delays in the arrival of public goods, a social planner allocates more resources to private investment and less to consumption relative to the first-best outcome in the canonical model (without delays). The presence of delays also lowers equilibrium growth, and leads to a diverging growth path relative to that implied by the canonical model. This suggests that delays in public capital provision may be a potential determinant of cross-country differences in income and economic growth.
Date: 2017-02
Publisher: University of Otago
Series: Economics Discussion Papers Series
Series number: 1702
ISSN: 1178-2293
Keywords: Public goods; delays; time overrun; cost overrun; implementation lags; fiscal policy; economic growth
Research Type: Discussion Paper
Languages: English