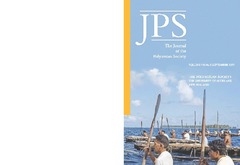 http://dx.doi.org/10.15286/jps.126.3.337-352
Cite this item: Goodwin, D., 2017. Precession Issues in Polynesian Archaeoastronomy. Journal of the Polynesian Society, 126(3), pp.337-352.
Permanent link to OUR Archive version: http://hdl.handle.net/10523/7784
Abstract:
Latitude and azimuth determination were crucial for Polynesian navigators, supplemented by techniques such as observations of swells, birds and expanded landfalls. Longitude could only be determined by dead reckoning. Both latitude and azimuth made extensive use of stars, which alter gradually over the centuries due to precession, the movement in the Earth’s axis of spin. Knowledge about the effects of precession can assist scholars in weighting one voyaging date higher than another, or in providing possible reasons why certain voyages took place in a particular era if navigation methods depended on star configurations that were particularly favourable in that era. The influence of precession on stars used for different methods of latitude determination is not intuitive. In this article a graph of the change in declination per century as a function of right ascension is proposed as a way of understanding the influence of precession on different methods of latitude and azimuth determination, and of deducing when and where significant configurations occur.
Date: 2017-09
Publisher: University of Auckland
Pages: 337-352
Keywords: Polynesian navigation; Archaeoastronomy; Zenith stars; Star pillars; Star compass; Precession
Research Type: Journal Article
Languages: English