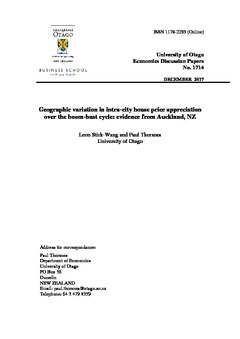 DP-1714.pdf (1.408Mb)
Cite this item: Stirk-Wang, L., & Thorsnes, P. (2017). Geographic variation in intra-city house price appreciation over the boom-bust cycle: evidence from Auckland, NZ (Economics Discussion Papers Series No. 1714). University of Otago. Retrieved from http://hdl.handle.net/10523/7795
Permanent link to OUR Archive version: http://hdl.handle.net/10523/7795
Abstract:
This study contributes to the empirical literature on intra-urban house-price dynamics. A demand shock affects metropolitan-area house prices, but the effect of the shock varies across neighborhoods. For example, in a relatively recent paper, Guerrieri et al. (2013) provide evidence that the variation in house-price appreciation across the census tracts in relatively large US cities is greater than the variation across cities overall; the intra-city standard deviation in house prices is about 0.5 relative to the inter-city standard deviation of about 0.2. Of interest is why this happens. More specifically, this paper contributes to the literature that addresses the question of how and why the effects of a demand shock flow through the metro-area housing market. The key data needed for this kind of analysis consist of price indices at relatively small geographic scales. Guerrieri et al., for example, use annual Case-Shiller repeat-sales indices at the zip code level. They also use much less frequent information from the decennial census at the smaller census tract level. In this study we use observations on estimates of median house value on 1 July in each of 111 census ‘area units’ – similar to US census tracts – in Auckland, New Zealand from year 2000 through 2016. This gives us relatively high spatial resolution and, conveniently, this time period covers a general boom, a mild bust, and then another boom in house prices
Date: 2017-12
Publisher: University of Otago
Series: Economics Discussion Papers Series
Series number: 1714
ISSN: 1178-2293
Research Type: Discussion Paper
Languages: English