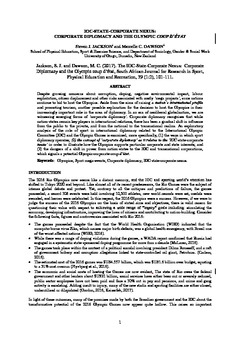 IOC-STATE-CORPORATE NEXUS: CORPORATE DIPLOMACY AND THE OLYMPIC COUP D’ÉTAT (360.9Kb)
Cite this item: Jackson, S. J. and Dawson, M. C. (2017). The IOC-State-Corporate Nexus: Corporate Diplomacy and the Olympic coup d’état, South African Journal for Research in Sport, Physical Education and Recreation, 39 (1:2), 101-111.
Permanent link to OUR Archive version: http://hdl.handle.net/10523/7864
Abstract:
Despite growing concerns about corruption, doping, negative environmental impact, labour exploitation, citizen displacement and other risks associated with costly ‘mega projects’, some nations continue to bid to host the Olympics. Aside from the aims of raising a nation’s international profile and promoting tourism, another possible explanation for the decision to host the Olympics is their increasingly important role in the area of diplomacy. In an era of neoliberal globalisation, we are witnessing emerging forms of ‘corporate diplomacy’. Corporate diplomacy recognises that while nation-states remain key players in international relations, there has been a gradual shift in influence from the public to the private, and from the national to the transnational realms. An exploratory analysis of the role of sport in international diplomacy related to the International Olympic Committee (IOC) and the Olympic Games is examined; more specifically, (1) the ways in which sport diplomacy operates; (2) the concept of ‘corporate diplomacy’ as it relates to the ‘IOC-state-corporate nexus’ in order to illustrate how the Olympics supports particular corporate and state interests; and (3) the dangers of a shift in power from nation-states to the IOC and transnational corporations, which signals a potential Olympic-corporate coup d’état.
Date: 2017
Publisher: SAJRSPER
Pages: 101-111
Keywords: International Olympic Committee; IOC; Olympics; Diplomacy; Corporate Diplomacy; coup d'etat
Research Type: Journal Article
Languages: English