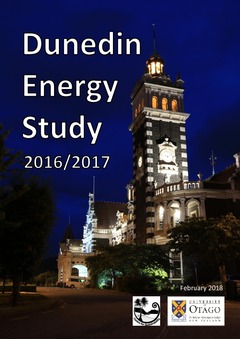 Dunedin Energy Study 2016_2017 - Final V2.pdf (1.223Mb)
Cite this item: Fitzgerald, W. (2018). Dunedin Energy Study 2016/2017 (Project Report). Centre for Sustainability. Retrieved from http://hdl.handle.net/10523/7896
Permanent link to OUR Archive version: http://hdl.handle.net/10523/7896
Abstract:
The Dunedin Energy Study is a joint research project between the Dunedin City Council (DCC) and the Centre for Sustainability at the University of Otago. The study takes stock of, and analyses energy inputs into the city of Dunedin. In this study, “Dunedin” refers to the area under jurisdiction of the Dunedin City Council (DCC), which is surrounded by Waitaki District in the north, Central Otago District in the west, Clutha District in the south and the Pacific Ocean in the east. This is the third consecutive year this study has been run and investigates energy consumption within Dunedin during the 2017 financial year (2017FY), referring to the financial year period 1 July 2016 – 30 June 2017. The first Dunedin Energy Study investigated the 2014 calendar year. This study is an action under the DCC’s Energy Plan 1.0, which recognises the need to encourage research that will enable the monitoring of Dunedin's energy uses and inputs. It will also help inform and assist with implementing other Energy Plan 1.0's actions, such as the Electric Vehicles action (promoting EV uptake and supporting infrastructure development) and Biomass action (expanding the production and use of biomass energy). This study was conducted between December 2017 and February 2018, and provides an estimation of the total amount of each energy type used within the city, along with an indication of the end uses of energy, and energy-related greenhouse gas emissions. The project relied entirely on the willingness of many businesses and organisations who supplied data. The project’s partners are extremely grateful to all participating individuals and organisations who dedicated a considerable amount of time to sourcing, compiling and providing relevant data.
Date: 2018-02
Publisher: Centre for Sustainability
Keywords: Energy, Dunedin, Renewable, Green house gas
Research Type: Project Report
Languages: English