Vietnam: The Next Asian Tiger? 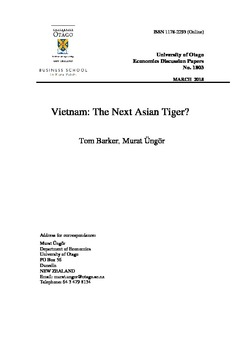 DP_1803.pdf (487.2Kb)
Cite this item: Barker, T., & Ungor, M. (2018). Vietnam: The Next Asian Tiger? (Economics Discussion Papers Series No. 1803). University of Otago. Retrieved from http://hdl.handle.net/10523/7973
Permanent link to OUR Archive version: http://hdl.handle.net/10523/7973
Abstract:
We investigate the growth experience of Vietnam, the country which has been getting recent attention as being the next emerging giant. First, we present an aggregate level investigation of Vietnam's economic growth experience, since the inauguration of reform in 1986 known as Doi Moi. We focus on a top-down approach that performs growth and level accounting exercises. These decompositions o er the possibility to track the economic progress of Vietnam and to formulate policy accordingly depending on where the gaps originate from. Second, we build a two-sector general equilibrium model, investigating the secular decline in agricultural employment. Despite the notable structural changes over the past thirty years, agriculture still has a substantial weight in the Vietnamese economy. We conduct a quantitative analysis using a theoretical framework, with an emphasis on the counterfactual outcomes of inheriting Chinese sectoral productivity growth rates, where China is recognized as the paragon emerging economy. The main ndings are: (i) Vietnam has grown impressively since 1986, but is still a relatively poor country in absolute terms; (ii) Vietnam must decrease its reliance on factor accumulation as its source of growth and increase its technological capabilities; (iii) economic policies should equally target both agricultural and nonagricultural sectors to increase sectoral productivity growth rates in Vietnam.
Date: 2018-03
Publisher: University of Otago
Series: Economics Discussion Papers Series
Series number: 1803
ISSN: 1178-2293
Keywords: Vietnam; capital formation; convergence; deagriculturalization
Research Type: Discussion Paper
Languages: English