‘No Spy Waihopai’: How does Praxis Inform the Theories of Pragmatic Nonviolence? 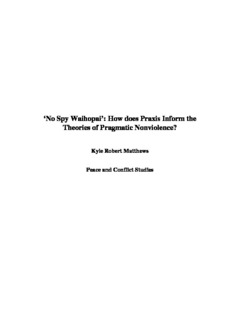 kyle matthews dissertation.pdf (504.7Kb)
Cite this item: Matthews, K. R. (2018, May 19). ‘No Spy Waihopai’: How does Praxis Inform the Theories of Pragmatic Nonviolence? (Dissertation, MPCS). Retrieved from http://hdl.handle.net/10523/8553
Permanent link to OUR Archive version: http://hdl.handle.net/10523/8553
Abstract:
This research attempts to analyse whether the praxis of a failed nonviolence campaign informs Gene Sharp’s pragmatic nonviolence theories. It summarises the theory into an eleven point checklist, and then outlines the history of a thirty year campaign against a Five Eyes spy base at Waihopai, New Zealand. The case study is then analysed through the checklist to ascertain whether the successes and failures of the campaign are predicted by the theory, or if the case study reveals flaws in the theory. The research concludes that the theory is a good fit for the case study, and with minor modifications, remains relevant for this context.
Date: 2018-05-19
Advisor: Devere, Heather
Degree Name: MPCS
Degree Discipline: Peace and Conflict Studies
Keywords: nonviolence; pragmatic; gene sharp; waihopai; new zealand; protest; peace
Research Type: Dissertation
Languages: English