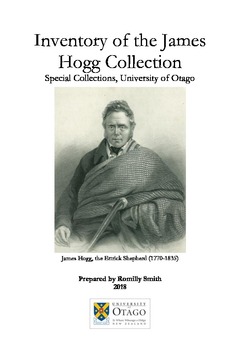 Inventory (4.841Mb)
Cite this item: Smith, R. (2019). Inventory of the James Hogg Collection. Special Collections, University of Otago (Working Paper). Retrieved from http://hdl.handle.net/10523/9106
Permanent link to OUR Archive version: http://hdl.handle.net/10523/9106
Abstract:
‘The works of James Hogg, the Ettrick Shepherd, have experienced a remarkable revival in recent years and sustained attention to his works is long overdue’. So says Alker and Nelson’s ‘Introduction’ to James Hogg and the Literary Marketplace: Scottish Romanticism and the Working-Class Author (2009). Now is the time to update Special Collections’ inventory list of the James Hogg Collection. Most of the Hogg Collection was donated to the University of Otago’s Special Collections by the great-grandchildren of Hogg, the Gilkison family, in 1952. The collection is comprised of books, some of which were formerly owned by James Hogg himself; and manuscripts, some being letters to Hogg from various correspondents including his contemporary and friend, Sir Walter Scott. Other books have been added to the Collection as part of the University of Otago Special Collections Acquisition policy. Importantly, from the first Hogg inventory (2003) by Dr Donald Kerr: ‘Internal evidence reveals 14 presentation copies from a wide range of individuals and 10 inscribed by him. One – The Adventurer – contains Hogg’s own personal response: “I esteem this work very highly, James Hogg”. Noticeable, there is the Bible (which Hogg was well-versed in), works by his near contemporaries Sir Walter Scott and John Galt, and Lawrence Sterne.’ For the purposes of this inventory, the items will be divided into groups: Works by James Hogg (in alphabetical order of title); Works by others – some of which were owned by Hogg (in alphabetical order of title); Manuscripts – mainly letters, with transcriptions; and Ephemera.
Date: 2019-03
Keywords: James Hogg; Special Collections, University of Otago
Research Type: Working Paper
Languages: English