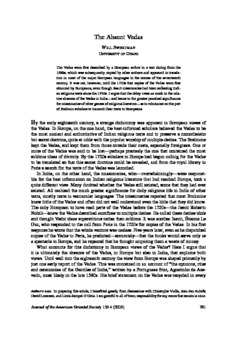 Link to publisher's version
Cite this item: Sweetman, W. (2019). The Absent Vedas. Journal of the American Oriental Society, 139(4), 781–803.
Permanent link to OUR Archive version: http://hdl.handle.net/10523/9829
Abstract:
The Vedas were first described by a European author in a text dating from the 1580s, which was subsequently copied by other authors and appeared in translation in most of the major European languages in the course of the seventeenth century. It was not, however, until the 1730s that copies of the Vedas were first obtained by Europeans, even though Jesuit missionaries had been collecting Indian religious texts since the 1540s. I argue that the delay owes as much to the relative absence of the Vedas in India—and hence to the greater practical significance for missionaries of other genres of religious literature—as to reluctance on the part of Brahmin scholars to transmit their texts to Europeans.
Date: 2019
Publisher: American Oriental Society
Pages: 781-803
ISSN: 0003-0279
Research Type: Journal Article
Languages: English