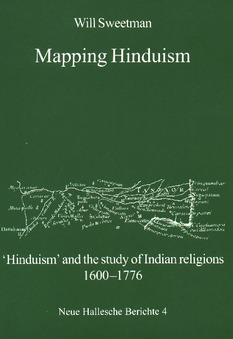 Link to publisher's version
Cite this item: Will Sweetman, Mapping Hinduism: 'Hinduism' and the Study of Indian Religions. 1600-1776 (Halle: Verlag der Franckeschen Stiftungen zu Halle, 2003).
Permanent link to OUR Archive version: http://hdl.handle.net/10523/9862
Abstract:
The process by which Hinduism came to be constituted as an object of European study is often taken to be the most egregious example of the invention of a religion through the reification of disparate traditions of belief and practice an the projection of theological preconceptions or imperial ambitions. In this work Will Sweetman offers both a theoretical reconsideration of the status of the term Hinduism and an alternative historical account of its emergence in the eighteenth century based on consideration of early Dutch, English, French and German sources, demonstrating that its scope owes more to Indian ideas of religious affiliation as the time of its emergence more to the evolving modern concept of India as a geographical entity than either does to theological preconceptions or imperial ambitions.
Date: 2018
Publisher: CrossAsia-eBooks
Pages: 187
Series: Neue Hallesche Berichte
Series number: 4
ISBN: 978-3-946742-40-1
Rights Statement: Attribution-ShareAlike 4.0 International (CC BY-SA 4.0)
Research Type: Book
Languages: English